The "X-Ray Astronomy 2019" Conference will be held in Bologna (Italy) from September 8th to September 13th, 2019, in the Conference hall of the Consiglio Nazionale delle Ricerche (CNR) in Via Gobetti 101.

In order to enter the CNR area, you have to cross a gate and show the conference badge.

Altogether, the four institutes host about 150 staff researchers, ~40 post-docs, ~25 PhD students, ~200 students of the Laurea degrees in "Astronomy" and "Astrophysics and Cosmology" and ~50 administrative staff. This makes the "Bologna Astrophysics Campus" the biggest Astrophysics campus in Italy and one of the biggest in Europe. 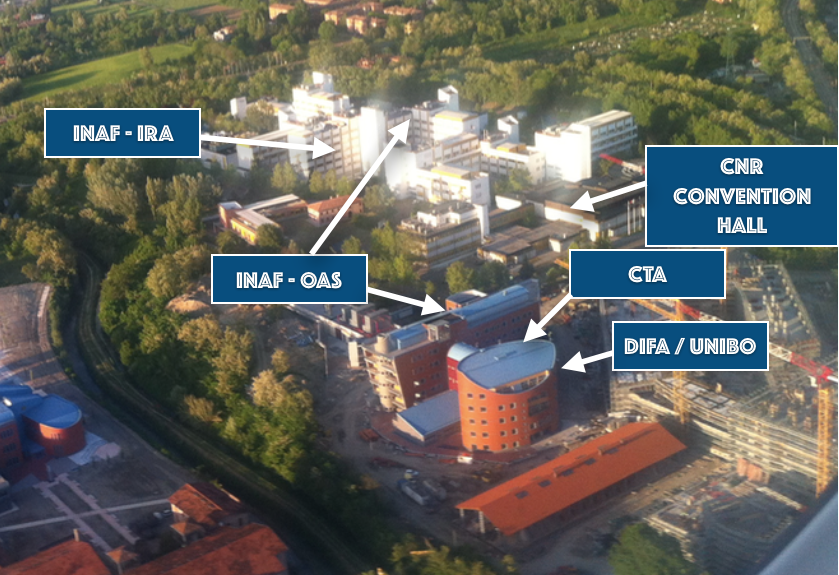 The CNR and Astrophysics campus are located in the northern part of Bologna, on the other side of the railway with respect to downtown Bologna. Here is a map of the venue,  with respect to the train station, bus station and downtown. 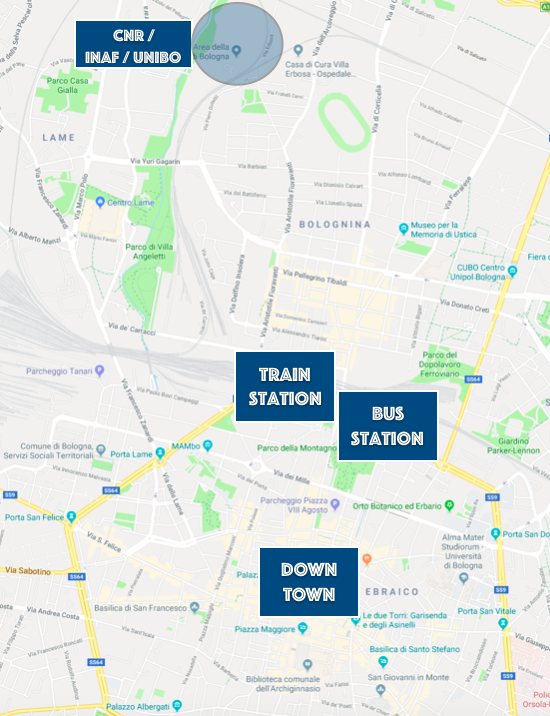 How to reach CNR Convention center

There is also another  bus with stop ~5 minutes from the the conference venue. The stops is called "Beverara".
BUS 30: running every 10' with stops in the city center, behind Piazza Maggiore (stops "Tribunali", "Farini", "piazza Malpighi") and then "Marconi" and "Stazione Centrale".
The bus ride is ~20 minutes from Piazza Malpighi.
From the stop "Beverara" you have to go towards the parco Lungo navile, cross a pedestrian bridge and you will reach the CNR entrance.

By bike:
MOBIKE : Bologna has a very efficient service of bike-sharing. MOBIKE bikes can be found everywhere in the city center and there is a MOBIKE parking spot right in front of the CNR gate. It is a short (10-15 minutes ride) from the city center, mostly on bike paths. The ride is 0.70 euro for 30 minutes. There is a very convenient pass for 9.90 euro with unlimited rides valid for 30 days.

CORRENTE: Bologna has a also a very efficient and convenient service of car-sharing, CORRENTE, with electric cars, which you may consider to reach the CNR area from the city center.