we inform you that, due to COVID-19 outbreak,

this workshop has been postponed.

We will let you know the new dates as soon as we re-arrange the conference. 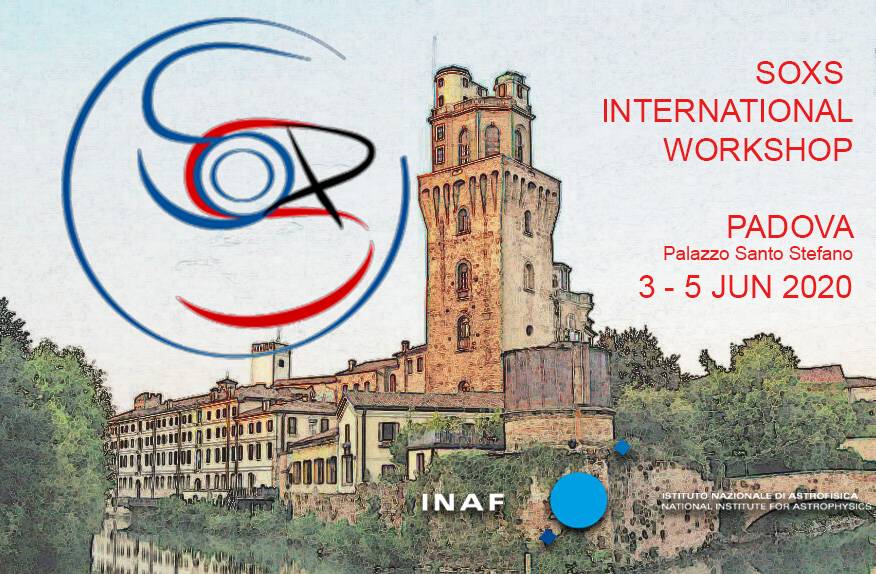 The Son Of X-Shooter (SOXS), the optical-NIR spectrograph for ESO-NTT devoted to the study of transient Universe, is well on its way and expected to have its first light at La Silla before the end of 2021.
The project successfully passed the Final Design Review and is in its sub-system integration phase in various Consortium premises: the final AIT activities on the overall instrument will be carried out in Padova starting in fall this year.

The instrument consists of two arms (UV-VIS and NIR) with partial overlap around 800 nm, that allows for simultaneous spectroscopy from 350 to 2000 nm with resolution R~4500. With respect to the father X-Shooter, the SOXS can also perform ugrizy-V photometry with a science-grade acquisition camera.

The Consortium building the instrument, made by several institutes of 6 different nations, will be rewarded by ESO with a Guarantee Time Observations (GTO) program consisting of 180 night/year for 5 years, with the possibility to trigger observations daily.
GTO programs will pass regularly through the ESO OPC with specific proposals, whose scientific cases must be well defined and clear.
In addition the Consortium will be responsible for the entire operations of the NTT.

At less than 2 years from the beginning of the SOXS operations, it seems appropriate to gather the community of scientists interested in transient and variable objects behind the Consortium to discuss the science cases, update the original proposals and stimulate new ideas in the light of the updated, expected performances of the instrument and in foresight of possible synergies with other present and future facilities such as LSST, Euclid, Swift, LIGO-Virgo, and ICECube and KM3Net, to mention just few of them.
The Workshop will be held in the Sala Consiliare of the Palazzo Santo Stefano in Padova (map)
how_to_reach_conference.pdf
Registration
Registration form
8 / 100
Register
Participants