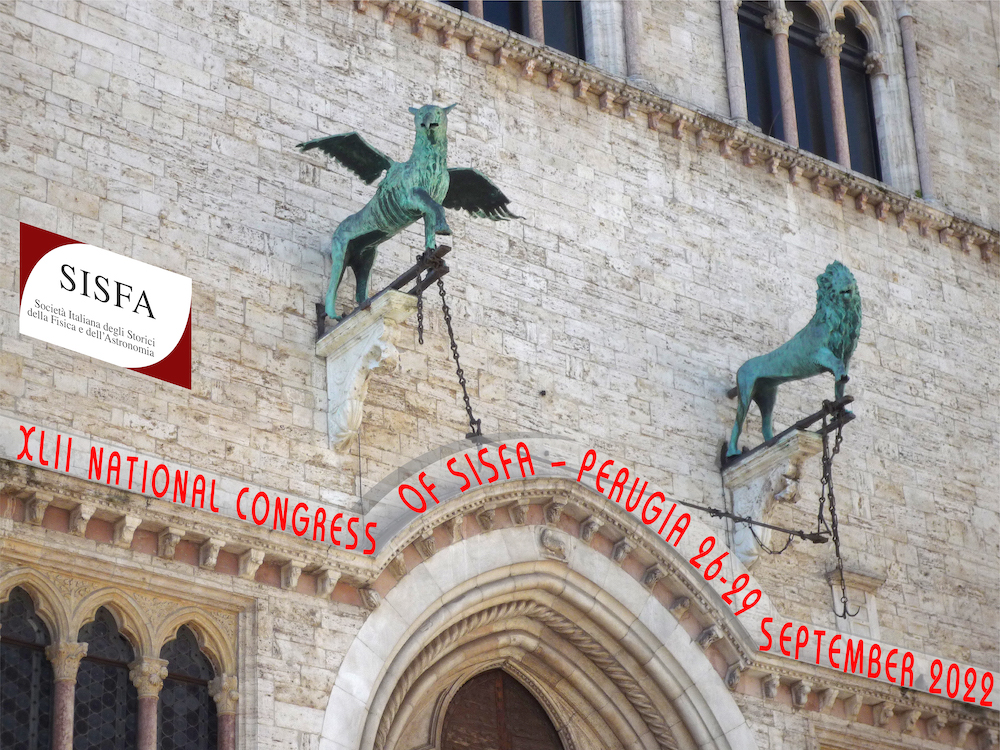 The 42nd national Congress of the Italian Society for the History of Physics and Astronomy will take place in Perugia on 26-29 September 2022.

The main venue will be at the Department of Physics and Geology of the University of Perugia (Edificio di Fisica, via A. Pascoli).

The Meeting is one of a well-established series that SISFA has been organizing on a yearly basis since its foundation. It aims at promoting the research activities in the history of physics and astronomy in Italy, carried out not only by academic historians but also by independent scholars and school teachers willing to explore the role of the history of physics and astronomy in the present-day teaching of the disciplines. At the same time, the Meeting provides an opportunity to strengthen the collaborations and establish new links among the members of SISFA and the members of other scholarly societies, as well as researchers working in the same and in related fields.

The Meeting will host both invited talks and oral communications. The official languages will be both Italian and English.

The Premio di Laurea SISFA 2022 for the Best Graduate Thesis in History of Physics and/or History of Astronomy will be awarded during the Congress.

The old teaching collection will be on display at the Department of Physics during the time of the Congress.

A pièce is expected to evoke the work and the vicissitudes of life of the physicist Bernard Dessau (Offenbach am Main, 13 agosto 1863 – Perugia, 17 novembre 1949).

Recommendend and planned visits: Perugia Underground: The Acropolis throughout the Centuries; Gypsoteca; Botanical Garden; Medieval Garden; National Archeological Museum of Umbria. The modalities of participation will be specified and announced later.

Astronomy and Physics in Perugia.

This special session evokes and discusses the main events and individuals of the history of physics and astronomy in Perugia. Some of the ancient scientific instruments still located at the Physics Department of Perugia will be exhibited on this occasion, including Girolamo della Volpaia’s armillary sphere dated 1575.

Planetary theories and astronomical instruments: mechanizations and visualizations between geocentrism and heliocentrism (1400-1700).

This special session aims at discussing the changing multiple roles of ancient astronomical instruments between the 15th and 17th century as well as their broader social, cultural and political contexts.

From Herschel to Hubble: A long debate.

This session will celebrate some important anniversaries by discussing cosmological theories before and after Hubble, the role of instruments and observations in our changing understanding of the Cosmos as well as the interrelations between astrophysics and cosmology in the XX century.

Physics and diplomacy: a chain reaction.

In view of the current political situation, SISFA will dedicate a session to the role of physics and physicists in international relations after World War II, with special reference to the field of nuclear physics and the activities gone under the rubric of nuclear diplomacy.

Special Session: “Women, Sciences, Scenarios” (co-organized by SISS, the Italian Society for the History of Science).
This panel focuses on some figures and groups of women trained as scientists and/or with a career in scientific research. Special attention will be deserved to the different scenarios – places, cities, spaces – where women’s lives and their careers took place, as all the speakers assume that places, cities, spaces were powerful agents in all their stories

Special thematic sessions will focus on the connections between science education and the history of physics and astronomy.

The conference is open to both members and non-members, but non-members who have never attended a SISFA conference should also submit their CV to congresso@sisfa.org.

To attend the conference it is necessary to register. Registration will be open after the acceptance of abstracts. Non-invited speakers have to finalize the registration after paying the conference fee. The conference fee will include three lunches and seven coffee breaks and will be used to partially cover the cost of the publication of the proceedings of the conference that will be published online and open access by Pisa University Press.

Titles and abstracts of oral communications should be submitted in English. The length of abstracts should be between 100 and 250 words and include no bibliography. All abstracts will be peer-reviewed on behalf of the SISFA scientific committee.